I saw the American Freedom Train - or, at least, one of the steam locomotives that pulled it, twice during its cross country tour back in 1975-76. The first time was in June of 1975 at Klamath Falls, Oregon.

I had just graduated from high school and was taking my first-ever solo road trip, visiting friends and relatives in Oregon, and I had just arrived in town for an overnight stay with my friend Ron Young when Ron told me that the American Freedom Train was laying over that night at the Southern Pacific yard downtown. I grabbed my camera and we headed down to the train station.

When we got there we discovered that it wasn't really the official "American Freedom Train," but newly-restored former Southern Pacific locomotive #4449 en route from Portland, where it had just been christened a few days before, to Sacramento, California, and from there to head east to meet the American Freedom Train in Chicago where it would take over from steam locomotive #1 in August. 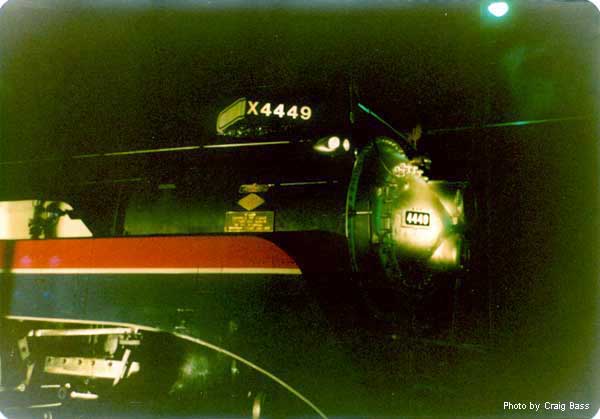 I wasn't much of a photographer and had no experience with night photography, so in that respect I suppose the picture turned out "okay."
Map location

A few months later, I moved to Phoenix, Arizona to attend Universal Technical Institute. In January, 1976, I heard on the news that the American Freedom Train was going to be stopping in Tempe for a couple of days at Arizona State University. This time I was able to get a couple of snaps of it during daylight hours.

Sadly, although the train was on display in Tempe for four days, I did not have time to tour the exhibits. I barely had time to get over there and take a couple of photos.  Still not a great photographer. 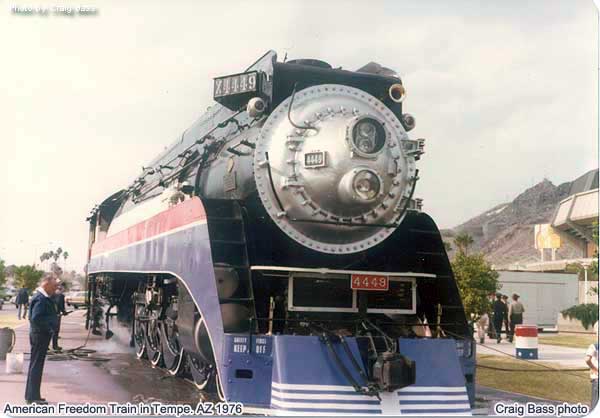 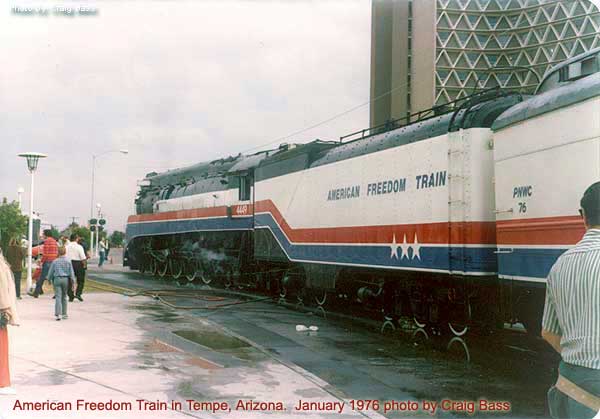 The tracks on which the train was exhibited no longer exist, and the street names have been changed since then. Map location

For more information on the American Freedom Train and its history, visit FreedomTrain.org. The page which has information about the display at ASU in Tempe, AZ can be found here.

A few years later, the same locomotive (former Southern Pacific GS4 Daylight #4449) had been returned to its original Daylight color scheme and was leading a train from Portland, Oregon to the 1981 California Rail Fair in Sacramento. My wife and newborn daughter and I had the pleasure of riding the train on its Portland to Eugene segment. It was my daughter Michelle's very first train ride -- she was 3 months old!