This is not an official website for Modoc Northern Railroad. 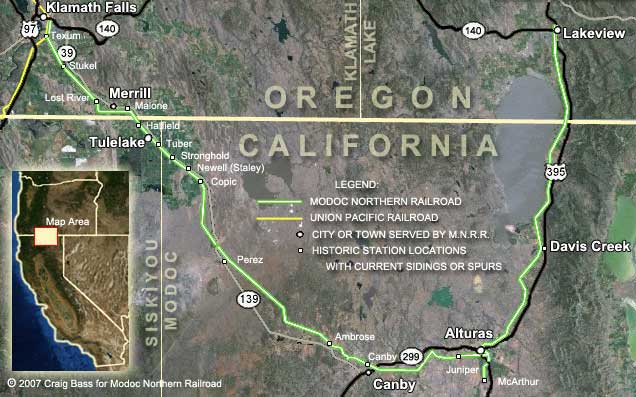 On November 1, 2005, operation of the Klamath Falls, Oregon to Alturas, California segment, the last remaining part of the Southern Pacific's Modoc line, transferred to the new Modoc Northern Railroad under a five year lease option with Union Pacific.

From the "About Modoc Northern Railroad Company" page of their official website (no longer in existence but viewable in text form in the archive.org Internet archives),

"Modoc Northern Railroad operates over 160 miles of track in northeastern California and southern Oregon. We are based in Tulelake, California and connect with Union Pacific Railroad in Klamath Falls, Oregon.

"Our name reflects the heritage of these historic rails, which were first laid in June 1927 by a Southern Pacific Railroad subsidiary, "Modoc Northern Railroad." The original Modoc Northern name was never officially used. It was a railroad that existed only on paper, and never ran a train. The line was owned and operated from the beginning by Southern Pacific, forming a portion of their famous "Modoc line" shortcut from Oregon to Points East.

"Following Union Pacific's purchase of Southern Pacific, 95 miles of the Modoc line in California between Alturas and Wendel were abandoned and removed. Since November 1, 2005, we have been providing service on the remaining portion of the original line, serving agriculture, timber, mining and other customers —and bringing the historic Modoc Northern Railroad name to life.

"In November 2006, we acquired the Lake County Railroad. Another line steeped in history, this railroad began as the northernmost portion of the Nevada-California-Oregon Railway, which reached Lakeview from Reno, Nevada in January 1912. The N-C-O was absorbed into the Southern Pacific's system in October 1926 and the Alturas, California to Lakeview, Oregon branch line was later purchased by Lake County in January 1986.

"Today, we are working to improve and revitalize these important rail corridors, providing communities along the Modoc Northern Railroad with a vital, responsive transportation link and the ability to attract new business and industry.

"Our success directly relates to the viability of the communities we serve. That’s our key to the future."

What was my relationship to the Modoc Northern?  Prior to the dawn of the Modoc Northern Railroad, I'd been hearing rumors that a new shortline operator was coming in to run the Union Pacific's line from Klamath Falls, Oregon, where I lived, to Alturas, California.  Having a long-standing interest in railroads, I began to diligently research the internet for references to the upcoming new railroad, and would post updates on my Craig's Railroad Pages website.

One afternoon, I was driving past the Texum wye when I saw a guy in overalls and a white straw hat measuring something about the track there.  Naturally, I stopped to see what was up.  The guy told me he was Don Blansett of the Modoc Northern, and he was checking out things prior to the launch of the Modoc Northern.  I introduced myself, and he said, "I know who you are!  We've been following your updates because you know more about the situation than we do!"

That was the beginning of a mutually beneficial relationship.  I say that not only because he would always call or email me to give me a heads up about something new, but I also gave him the name of a guy I knew who was a good hand and since Don was currently hiring for the new railroad, that worked out well for all involved.  And when the time came, my expertise as a rail fan who had also been a professional web designer for six years then, made me a shoe-in to be the one chosen to build the Modoc Northern's website.

Sadly, the Modoc Northern is now a "fallen flag."

On May 5, 2009, Union Pacific terminated the MNRR's contract and took back over the operation of the Modoc Line from Klamath Falls to Alturas. Lake County also soon terminated their lease and retained a new operator.

I lost track of Don about the same time, and the MNRR's website came down.  Although rumors about regarding the last months of the railroad and other topics surrounding it, I have no first hand knowledge of any of them and cannot speculate on their validity.

This, then, may be considered as my tribute to the Modoc Northern Railroad.

Prologue to the MNRR's lease of Union Pacific's Modoc Subdivision

Union Pacific sends out a clean up train

April 20, 2006: Eroded embankment on the Lake County Railway, and exploring on the way back home

The end of the line